Really looking forward to traveling to Carrara to the Tuscan landscape, the excitement I feel when I think of seeing Campo Cecina as you come in on the freeway, the sense of homecoming…the Apuan mountains those great chunks of calcium carbonate thrown up by the heaving and buckling of the earth, the sight of them excites me. I first went to Carrara in 1979 on an Italian Government scholarship, from the first day I felt at home. 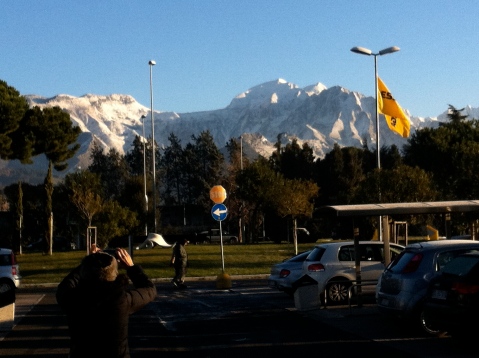 Took this photo from the car park of the supermercato in Avenza, Campo Cecina snow capped rises up untamed wild and raw.

I wrote the following three decades ago, as this is my first posting to this blog I feel like am returning to this “source”…..

By 1977 I had carved half a dozen figures and heads in timber, up until this time I thought of myself primarily as painter, but the process of carving into a lump of material and seeing your concept slowly emerge felt so satisfying and natural to me. I loved the reductive process, but as far as timber is concerned although a lovely medium, has all sorts of limitations; it’s got knots, warps easily, termites can eat it etc. This together with the fact I’d hitched around Europe in 1976, staying in Rome [name me a more sculptural place than Rome!] for six months,  attending the Accademia di’ Belli Arti briefly[before my funds dried up] led me to start thinking more and more about sculpture.

In 1978 I was  awarded a sculpture prize, I made a huge “hand on a walking stick”  in fiberglass a material that [after four months of scratching myself] I learnt to dislike immensely!At this same time I formed the ambition to go back to Italy and carve marble, however I had no idea where I should go. I applied for an Italian Government Scholarship and miraculously I received one……Stewart Purves at Australian Galleries, Melbourne Australia, suggested that I contact Joel Ellenberg [ Australian sculptor b.1944 d.1980]. Some time later I met with Joel, who sadly was gravely ill, but notwithstanding was very vital in spirit, Joel said “Go to Carrara……” He gave me names of people to contact and the key to his apartment there.

So in October 1979 I left for Carrara. I arrived exhausted, falling asleep and passing Carrara twice, on the train up from Rome. My first site of Carrara was around dawn, with the light raking across the famous Apennines mountains, there was marble everywhere, marble buildings, bench’s, road curbs etc. etc. I fell in love with the place straight away. I found the apartment up a little road called “Via Ficola” that wound its way up a hill just out of town, The apartment was built in the 16th century and possessed a lovely marble paved terrace, that afforded a spectacular view to the sea ahead and the mountains behind. Next day I went down into Carrara searching out the different contacts Joel had scribbled down for me.

For a young sculptor, Carrara is intoxicating, set against the spectacular Apennines that form a back drop to the town, great rugged mountains with big marble teeth extracted from centuries of quarrying. Walking around this ancient broken down working town I marveled at the great trucks loaded up with twenty tons of marble rumbling down the tiny dusty road “Via Carriona” built by the Romans for ox drawn carts. The place like all of Italy reeks of history. The river passing through the center of the city ran white, I learnt later that this was because the water was used to lubricate the saws that never cease reducing great blocks into “lastre” [slabs] the white was the dust from the marble. Wherever you go you can hear the grinding back and forth of the multi bladed “sega” the whole town revolves around marble.

Within a day I found myself a corner to work at Studio Nicoli presided over by the inimitable Sig. Carlo Nicoli [for those who know this place I need say no more, suffice to say that it is a sculpture workshop run by the Nicoli Family for many generations, efficient in a crazy Italian way, working there has been for me alternately frustrating and or sublime]  The sense of camaraderie was instant I met sculptors on my first day at the studio from Spain, America, Belgium, Sweden, Africa, Japan, etc. There was even one other Australian! I got myself a block of stone bought some hand tools and started carving a “Neffertiti” like head I called Dear John my first marble piece. As the days went by I felt incredible happiness and contentment well within me, I loved the medium of marble, I loved Carrara,I loved all these sculptor people who showed the same crazy compulsion, working with purpose and passion from the morning to the night. Writing these words now brings tears of nostalgia for times had…..wonderful times, bohemian times when I was out all night drinking cheap wine, arm wrestling mad Norwegians, making music, listening to the songs of the “Lizza” sung by old quarry workers primed up on grappa who gathered, like many of the sculptors at the “Bar Anarchista” to play chess. Let me tell you there was nothing to do besides hang out at bars, there were several cinema’s which ran mostly Italian comedies, Hollywood releases and porno films, I remember the biggest act was when Cicciolina came to town! Yet notwithstanding “we” the sculptors had a  wonderful social life, we worked all day and played all night,   I did this for about 8 months before I collapsed with exhaustion and the flu!   I produced in the year I was on the scholarship a considerable amount of work enough for a one man show back in Australia. Schip 1983