On our second day with Neil he suggested we go to an area called “Valnerina”.  We stopped along the way for a coffee and a brioche at a bar and sat next to a bunched up group of “Cacciatore” Italian hunters dressed in their traditional gear. October is hunting season, I read in the news that 35 hunters and one mushroom hunter had died in shooting accidents, there were calls for the government to tighten up the rules, but I doubt if this will come to anything after all this is Italy!

We left the mens gathering who by now were playing cards and drinking wine and  continued up and over a high mountain range and then descended into the “Valnerina” a beautiful secluded mountainous area covered with forests. Wolves and Cingiale reportedly still roam this area.

We made our way to “Leonessa” on the border with Abruzzo  Neil new of a great trattoria where we ate an excellent lunch. we walked around the town visiting the beautiful Piazza ….every town in Italy has a beautiful Piazza everyone unique. 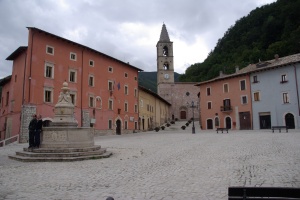 From here we drove to a small town called Monteleone ( Mount of the Lion) to see the extraordinary sixth century BC gilded bronze Etruscan chariot, what we saw was a reproduction made by the Italian Sculptor Giacomo Manzu in the 1980’s, the original is in the Met in New York. It is a truly magnificent work of amazing artistic skill illustrating the Iliad story of Achilles and his battles with the Trojans. The original was discovered by a local peasant farmer in 1902 who apparently sold it for scrap. 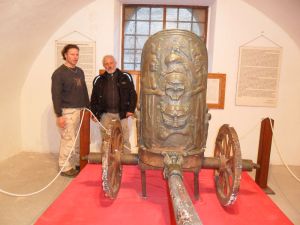 Over the next couple of days we visited Spoleto, Spello and a blur of other Umbrian wonders culminating in a “gita’ to what was the highlight for me… Orvieto with its amazing Duomo resplendent with Luca Signorelli frescoes. At the end of the day returning to the magic of Neil’s 12th century tower house with its views across a landscape of tranquilizing beauty. How much delicious food and amazing art can you take in!

View across the aqueduct looking towards Spoleto 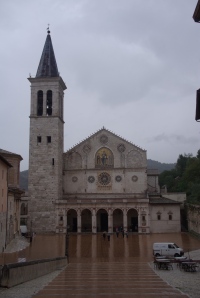 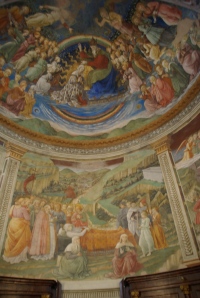 Niel took us to a place high up in the mountains in the Valnerini called San Pietro In Valle one of the most beautiful places I have ever been too, a monastery originally founded in the 8th century by Faroaldo II Duke of Spoleto, sacked in 996 by the Saracens rebuilt and then enlarged over time, it is now a luxury Hotel. I have promised myself to go back to this extraordinary place and stay in the spring.

You are currently reading Giorni meravigliosi in Umbria at Peter Schipperheyn Sculptor.