Working on the “Alchemist and the tale of the wooden cotton reel” completed this work few weeks before my April one man show with Mossgreen Galleries. Blessed with a superb block of Carrara Statuario Marble, white translucent with that special warm glow. You have to work this stuff to know and feel its magic! 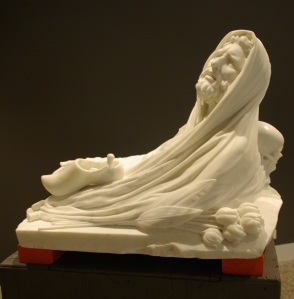 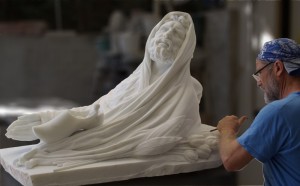 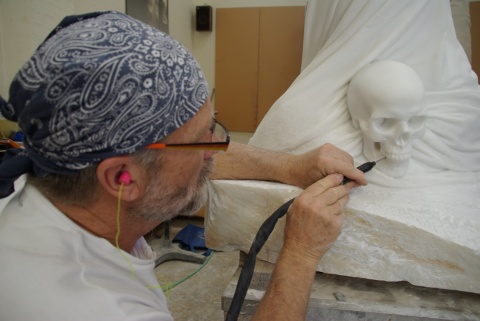 Working on “The Alchemist, and the tale of the wooden cotton reel”

“Asleep” Artist: Peter Schipperheyn, born Melbourne Australia 1955-  Title:  “Asleep”  carved 1987 Dimensions: 460 mm in height by 2020 mm in length by 800 mm in depth [life-size figure].  Medium:Carrara Statuario Marble .  Present location: Mt Macedon Cemetery, Mt Macedon. Victoria. I carved this sculpture “Asleep” and she has been on many other peoples blogs, now she sleeps in mine. I ask myself why I have put “Asleep” on this page, when it is not actually a work in progress. My “Asleep” has been discussed and commented on  in hundreds of other blogs and leads me to ponder this: what is about this sculpture in particular that sparks such interest? I wrote the following many years ago, it is a story about meeting a remarkable individual who changed my life.  “Asleep” is placed upon his gravesite. In 1981 I met an extraordinary individual: Laurie Matheson. He  purchased the largest work I had made at that stage a life-size carving of Cinzia [“My Wife”] a sculpture from my first one man show, the exhibition was of work I had carved the year before in 1979 whilst in Carrara on an Italian Govt. Scholarship, it took eight people to lug the marble sculpture from the truck into his garden. After much cursing and one squashed finger we placed the piece on the site. At this point, Laurie who had pitched in and sweating like the rest of us, introduced himself, declaring he liked my work very much, up until this point I had not realized this, thought that he was one of staff around the place [It was an impressive place at that, to a young impoverished sculptor]  Laurie was in high spirits and invited Cinzia and I in to celebrate with a glass of champagne. We toasted and talked, he asked me “well young man what are your plans”? I said what I really would like to do is go back to Carrara and carve a big chunk of marble. But had no idea how this was going to happen [niente moneta!]. Laurie got up and came back shortly after, put a fistful of money in my hand and said why don’t you go back to Carrara and make me a BIG sculpture! Wow! how fantastic is this …amazing! I exclaimed., Laurie suggested that I prepare an idea and that we meet again at his country property where the sculpture would be placed. CInzia and I left elated, I went into the studio to work my idea as a maquette in clay. After some weeks I arranged to see Laurie again. We arrived at his country house outside of Melbourne, a party of Russian business people where whooping it up fired up on the flammible stuff as they like to refer to Smirnoff.. Laurie said “Lets see the maquete put it on the table!. I unwrapped it and put the maquette in the centre of the table , everbody enthuised over the image, and I was dreaming about carving it in marble already. [S…HE] When it came to formalising the business aspect of the commission Laurie pulled me aside as the Russians broke out in song. and said well “What will it cost”? I bit my tongue and told him the price at the time it seemed to me like a small fortune. Without further mention Laurie got up and disapeared returning shortly afterwards and to my amazement he paid the whole amount upfront. I asked Laurie don’t you want me to sign a contract? He looked me in the eye and said “What will a contract do, I have made up my mind and I don’t think that you would be so silly as to squander the opportunity that this represents for you”. I pinched myself to make sure I was not dreaming. Cinzia and I left for Italy and had an incredible twelve months in Carrara Italy, during this time I carved my first major work in marble “S…HE” and as well many other sculptures which together was enough for my second one man show. Sadly some years later Laurie became ill and after what seemed a brief time passed away. I think of him with great affection and cherish having known him and thank him for the extraordinary difference he made to my life…….. In 1987 I was asked by his Widow Christina to carve a figure called “Asleep” in Carrara marble as his gravestone.

§ 6 Responses to Works in progress